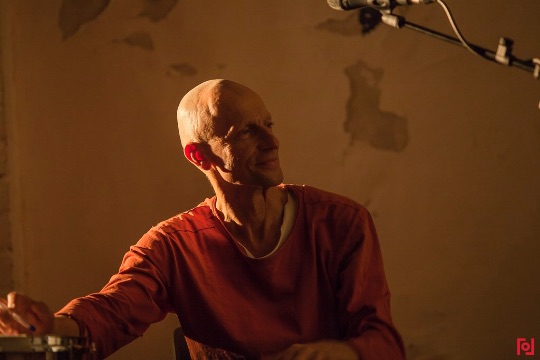 Anton Aleksandrovich Adasinsky was born on April 15, 1959 in the Krasnodarsky region of the USSR. His mother - Galina Antonovna Adasinskaya (1921-2009) - was the granddaughter of Mensheviks M. I. Broido and E. L. Broido. Second cousin - British rock critic and journalist Nick Cohn.

He trained at the Studio Theatre of V. Polunin, worked with Litsedei. From 1985 to 1988 performed in the band AVIA (vocals, pantomime, trumpet, guitar). Participated in shooting of Alexey Uchitel's documentary "Rock" (1987). In 1988 organized the theatre "Derevo" in Leningrad, which he leads to the present day. After several years of work in Leningrad-St. Petersburg, the DEREVO theatre was based in Prague, Florence, Amsterdam. Since 1997 DEREVO is based in Dresden, Germany, and has had a full-time rehearsal studio.

In 2001, Anton Adasinsky performed the role of Drosselmeyer in the ballet The Nutcracker at the Mariinsky Theatre (staged by Mikhail Shemyakin).

In the last few years he has renewed his performances with AVIA in the roles of soloist, leader of the physical band, trumpeter, bassist and guitarist.

the shooting of the film
"A Ticket to the Divine Comedy"

Friends!
We finished shooting on Olkhon Island! It was fabulous!

The island helped us with the landscapes and sunsets... Rainbows, storms, cormorants and shamans.
Here, have a look.
Next shooting in October in St. Petersburg-Moscow.

"Ognivo vs. the Magic Well"

The teaser-trailer for the film "Ognivo vs. the Magic Well," based on Andersen's fairy tale, where Anton Adasinski plays the role of Ober-Politsmeister, has been released.
Director: Andrzej Petras
Read more about the film here:
https://www.proficinema.ru/news/detail.php?ID=361369
and be inspired by the teaser
https://www.youtube.com/watch?v=aU7HWQ-gjgY

"Divine Comedy" at the "Window to Europe" Film Festival.

The production team of The Ticket to the Divine Comedy (directed by Anton Adasinsky) presents the trailer and concept for the film at the Window to Europe film festival in Vyborg.
more

OLKHON ISLAND, KHUZHIR, BAIKAL
Filming of "The Ticket to the Divine Comedy" and A. Adasin's master class. Adasinsky at the RADI SVETA festival
more

VIA AVIA in the club "Vremya N"

VIA AVIA in Zyuzino Rumochnaya

Performance of "The Shelter" at the Diaghilev PS Festival